As their name implies, wetlands are areas of land that are covered by water. These areas can be wet year round, seasonally, or intermittently. Wetlands serve as a link between terrestrial (land) habitats and aquatic habitats, such as streams, lakes, and the ocean. Wetlands have specific soils as well as plant and animal communities. The US EPA categorizes wetlands into four major types: marshes, swamps, bogs, and fens (http://www.epa.gov/wetlands). In Southern California, we primarily have tidal or coastal marshes as well as some non-tidal marshes surrounding lakes and rivers.

Why are wetlands important?

Wetlands are critical for our environmental and economic well-being. From an ecological perspective, wetlands are a unique habitat that is very productive and biodiverse. Because they serve as the link between land and water, they provide habitat for very specific plants and animals. Wetlands are important in nutrient cycling and provide a vital and abundant base of the food chain. Wetlands also provide ecosystem services or benefits to people. Wetlands serve as a natural flood control, absorbing and slowing floodwaters from storms, rivers, and the ocean. With impending sea level rise due to climate change, intact and functioning wetlands will be more important than ever. Wetlands also serve to store carbon, further buffering against climate change. Wetlands provide clean water and air to people, filtering pollutants through plant uptake. Wetlands also provide food to people through fisheries; coastal wetlands serve as nursery habitat for many economically important fisheries. Further, wetlands provide numerous recreational and educational experiences to people; they are places where we love to walk, bike, run, kayak, and view wildlife. Wetlands are particularly popular with birdwatchers since wetlands act as rest stops for birds, providing food and habitat for millions of migratory species. 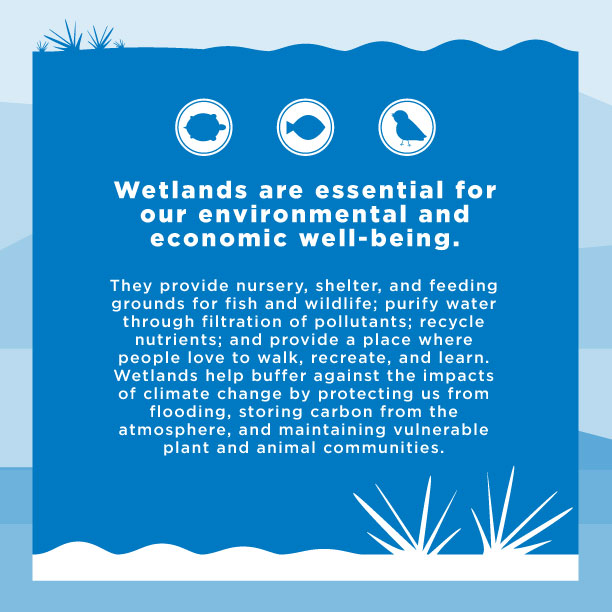 Why do wetlands need restoration?

Despite the importance and benefits of wetlands, there has been unprecedented loss of wetland habitat in Southern California. Over 95% of our coastal wetlands have been destroyed, primarily due to development and being filled in and used as dumping grounds. The few remaining wetlands are reduced in size and degraded, suffering from impacts of channelization, pollution, and invasive species. The need to restore our remaining wetlands is urgent and essential.